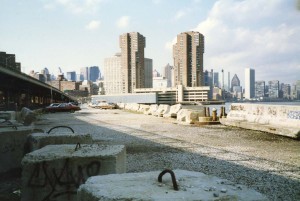 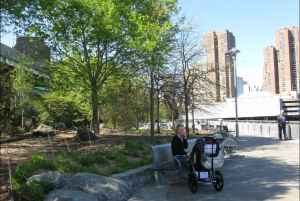 Stuyvesant Cove Park was not always the meandering walkway flanked by benches and beautifully landscaped plant beds. In fact, the park occupies the former site of a cement plant that operated at the location, leaving behind a brown field once it closed.

In the mid-1980s, the Related Company devised a plan to build Riverwalk, a complex to be comprised of 1,888 luxury residential units, a 245-room hotel, a 200-slip marina and 220,000 square feet of commercial space, including offices, restaurants and theaters. The buildings were to be built on platforms extending into the river. Area residents, fearing they would lose access to the waterfront, as well as light and air, rallied against the development. Over the next decade the movement, named Citizens United Against Riverwalk (CUAR), also argued that the proposed plan would overwhelm the area’s infrastructure and be detrimental to the aquatic life in the river.

The plan was finally defeated in 1992 and in 1997 the Economic Development (EDC) announced a new effort, spearheaded by local elected representatives including the late Senator Roy M. Goodman, former Assemblyman Steven Sanders and former Councilman Andrew S. Eristoff. Over the next several years a plan took shape that reflected their input as well as that of CUAR, Community Board 6 and countless concerned area residents.

Due to Covid 19 restrictions, the SCPA was unable to present a concert series in 2020. But, in 2021, due to the overwhelming response from the community, The Stuyvesant Cove Park Association, in consultation with Solar 1 staff and construction site supervisors, was able to carve out a space to hold the annual concert series even amid the ongoing ESCR Project. In all, the SCPA was able to present 8 concerts featuring:

Visit https://www.youtube.com/c/PabloGomezNYCViews for a sample of Sean Mahony and The NY Swing Orchestra at Stuyvesant Cove Park.

21TH ANNUAL MEETING OF THE FRIENDS OF STUYVESANT COVE PARK

Anyone interested in participating can request the link by emailing mjb10022@mail.com

The Public is cordially invited.

Please join the meeting and learn about the progress of the ongoing construction and when full access to our beautiful park might be restored.