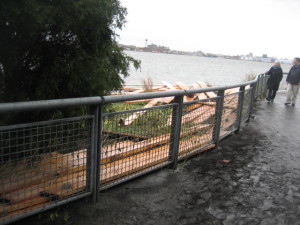 In October 2012 Hurricane Sandy roared into New York City leaving a trail of destruction throughout the region and the city. In Stuyvesant Cove Park plant beds were destroyed, soil and mulch were washed away and the performance stage was reduced to a pile of rubble.

Thanks in part to funds from the Stuyvesant Cove Park Association, the team at Solar 1, joined by our Park Angels and other members of our caring community, were able to restore the park. 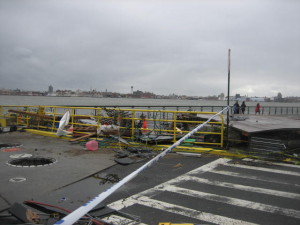 Hurricane Sandy, with all its devastation, served to reinforce the need for The East Side Coastal Resiliency Project. Using a combination of flood walls, deployable barriers and berms, the project seeks to make changes to the construction and landscaping of waterfront locations so that they are better situated to prevent, or at least better survive, the effects of a future storm surge. The plan has undergone a number of changes, many of which resulted from comments received at community meetings. Click here for the most recent plan update.

Tuesday, July 20 -- SEAN MAHONY & THE NY SWING ORCHESTRA … Swing and well-loved classics to get you moving

Concerts take place from 6:30-8:00pm. During the current resiliency construction project the performance site has been relocated to the area surrounding the 20th Street entrance to the park. The concerts are free of charge and open to all! Performance dates are subject to change and rain dates will be announced as needed. Additional performances may be announced.

20TH ANNUAL MEETING OF THE FRIENDS OF STUYVESANT COVE PARK

Rain dates and any additional concerts will be posted on our Facebook page.

Please join us to hear reports on past, current and future events and activities at Stuyvesant Cove Park.